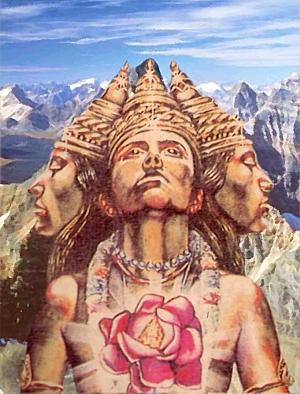 From a rather “physiological” point of view, the expression “Altered States of Consciousness” implies an ordinary or even “consensual” state of consciousness, from which there are extraordinary quantitative and qualitative divergences. These fluctuations can be described as either involving expansion or retraction.

The “ordinary state of consciousness” is dynamic and fluctuates daily within a range of possibilities which, if they were measurable, could be displayed in a Gauss curve. Normal, everyday things like dreams or so-called “hypnagogic” phases – the creative, imaginative sleepiness that comes before sleep or follows waking up – are in fact fluctuations of our state of consciousness, as are also what we experience in moments of great alertness.

Other, less normal, experiences, like so-called lucid dreams, or highly charged emotional moments in which there are significant changes in perception and in our physiological state, may be considered as “altered states of consciousness”. Other states, including the torpor induced by drugs, sedatives, alcohol, excessive physical tiredness and sleep deprivation, can be put in the same category. As one would expect, there is no precise dividing line between the various states of consciousness, which are essentially subjective.

It’s clear that a more precise knowledge of the physiology, the nature and the epistemology of this “ordinary state of consciousness”, and of the necessary resources to cure distortions, is essential. Knowledge of the various states of consciousness and their properties, knowledge of how to induce and use them, and the teaching of this technology – all this could certainly create a new phase in human history and evolution.